What is stopping us from building the kind of Saskatoon we all want to live in? Or, maybe a better question to ask would be, “Is anything stopping us?”

Maybe we just need to get out our shovels.

On Thursday June 11, 2015, a small but mighty group of people gathered at the Meewasin Valley Centre to take part in a roundtable discussion on transit and urban issues. Part of the We Are Cities project, the event was facilitated, skilfully and efficiently, by Sarina Gersher and Mandy Chen of Bus Riders of Saskatoon. Participants came at the questions from many different angles: some worked in public health, some in art and design, others in community organizing and social activism. Some were simply interested as citizens. But what became clear through the evening was that many of us recognize the same challenges in our city, and we also agree on some huge opportunities. The hard part is acting to pursue those possibilities.

Strengths and Challenges: Or, Why You Shouldn’t Ban Swimming

In two groups, participants discussed and presented what we felt were Saskatoon’s three greatest strengths and challenges. Without peeking, both groups produced nearly identical lists of strengths, identifying the river valley, or the accessibility of our natural features, our strong neighbourhood connections, and the vibrancy of culture as our city’s key assets . There was also an overlap in lists of challenges, which included racism, systems of social and economic disparity, resistance to change, car culture, and urban sprawl.

The groups then discussed tools  for tackling some of these issues. Some of the phrases which emerged:

One of my favourites: people value things more if you give them more access. So in order to protect the river valley, we need to DROP THE BAN ON SWIMMING. WHY SHOULD THE CITY’S FEAR OF LIABILITY DEPRIVE PEOPLE OF THE RIGHT TO GET WET AND SPLASH EACH OTHER?

No Bus is an Island

Later discussion zeroed in on transit issues. It was refreshing for me to hear different voices bringing up ideas that I would have previously have put in the “too hard” and “too expensive” category, and asking “why not?” One participant pointed out that a number of cities have made transit free. (Even Calgary has a ‘free fare zone‘ in the downtown portion of its LRT line.) Since the city doesn’t make back its transit investment through fare revenue anyway, why not increase ridership and get cars off the roads by just making transit free? Sure, there would be challenges. But the point is, don’t dismiss a simple idea, and a good idea, for being too ambitious. Maybe the city should just figure out, “How much would free cost?” 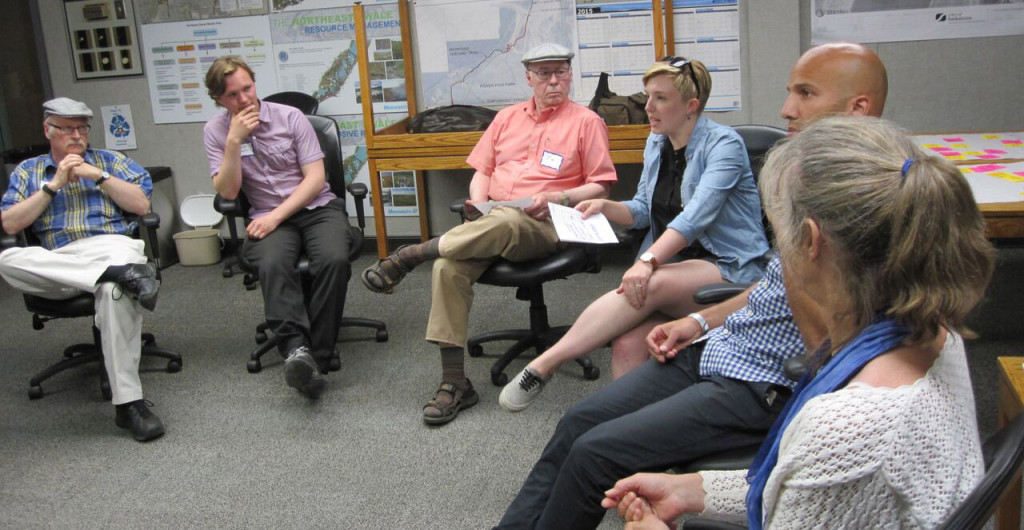 At the end of the evening, we synthesized. Free transit seemed to be one idea that resonated with the group. There was a general feeling that we shouldn’t be afraid to experiment, as a city. We also need to engage with decision-makers and make transit an election issue. And we need to oppose the ongoing expansion of car-centric infrastructure.*

One of my favourite points that was made is that transit has social justice and environmental implications. It has so many connections beyond just itself: really, all urban questions are interwoven and tangled up together. You can’t address  one without thinking about all the others.

Breaking Out the Shovels

The things we want as part of our city remarkably unified. And if the power structures of “it’s too hard” and “change costs too much” are standing in our way, we need to stop listening to their closed-circuit logic. We need to start doing things.

One of the recent exhibits at the Storefront on 20th Street had a panel on ‘tactical urbanism‘. Basically, that’s the idea of ordinary people doing quick-and-dirty interventions to make their cities and neighbourhoods better. One of the best examples I’ve seen recently went up right across the street from the Storefront. I had the privilege to help a small group of people from Streetforce Youth Centre to build The Scoop, a tiny ice cream shop which gives local First Nations youth a chance at a first summer job. The owner of a parking lot donated the use of his space, a developer donated cladding materials from a house he’s demolishing, volunteers built it, and now these youth who often face discrimination from potential employers get to put something solid on their resume.

So I think we need to operate at three levels.**

All the different levels of action feed into each other. We can speak to those in the air by showing them what we can do on the ground.

I think what encouraged those of us who attended this roundtable was the realization that, in more ways than we realized, we are all part of the same Project. We are building one city, and we are that city, and many of us have the same goals. We desire a more equitable, accessible, environmentally thriving, culturally vibrant, socially undivided and interwoven city.

And if we all agree on what kind of city we want to live in, and that kind of city isn’t being built? Then the systems or people in charge are making a mistake, and they need our help.

*Another idea was that, while 10 Days for Transit was great, we need a yearlong forum for sharing ‘transit hacks’ and cross-pollinating ideas. Could this website be that place? Could the BRS facebook page be that? Or something else? What can we change to make our sites into more of that thing? Thoughts, anyone?

**Speaking as someone who is very new to activism, and recognizing that wiser people have already thought this through much better than I can.

Stephan is frequently cynical and has an on again, off again interest in politics and holding our public officials to account, mostly at the municipal level. Despises hypocrisy. A number cruncher born and raised in Saskatoon. Mmmm, crunchy numbers. Blogs at yxesimonsays.wordpress.com and tweets @yxesimonsays

There are no upcoming events.

Better Transit YXE @BtrtransitYXE RT @Transit4Indy: "Great transit is not designed around you. It's designed as a diverse network for everyone." @humantransit #transitdrives…

h J R
Better Transit YXE @BtrtransitYXE RT @StrongTowns: A road diet in one the most car-centric city proves that safer streets can be achieved in spite of public pushback https:/…