Disappointing news from the December 14, 2015, Saskatoon City Council meeting. Despite a decline in ridership, Council passed an increase to transit fares, with only Councillors Pat Lorje and Zach Jefferies voting against the motion. Sadly virtually every fare category will see an increase. These increases will fly in the face Council’s usual objective of keeping fare increases in line with the City’s Municipal Price Index (MPI) of 2.91%. The chart below shows the percent increase in rate fares, as well as the expected increase in 2016 revenue from each category’s increase. 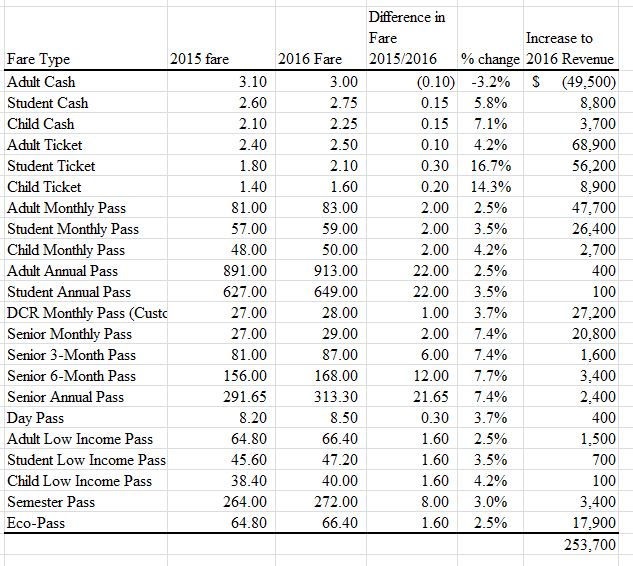 Hardest hit are seniors, high-school students, children, and by extension, their parents. While the increases for student and child single use tickets are the greatest, when considering the percent increase, bulk tickets for seniors are also high: between 7.4% and 7.7%. Even low income student passes and low income child passes are subject to an increase at a greater rate than the MPI of 2.91%.

Only one benefit can be noted: the reduction in the adult cash fare to a logical and much more convenient even $3.00.

Council chose not to increase fares last year in the wake of the lockout. Those gains are about to be completely wiped out, and then some. For example, last year the proposed (and rejected) increase to child and student tickets was $0.10 (each). The increase coming in 2016 is $0.20 and $0.30 respectively.

City Council was able to avert a black eye while opposing the fare increase proposed in the 2015 budget, as it knew the poor optics of increasing fares on the heels of locking out transit users for four weeks. Rather, it deferred these increases to 2016, and in some cases more than doubled them.

Hypocritically, City Council recently chose to lower the cost of admission at City leisure facilities in order to attract more usage. However, in the face of ridership decline, Council chose to squeeze riders with relatively large fare increases to generate barely more than a quarter of a million dollars in additional fare revenue. This is a relatively small amount, compared to Saskatoon Transit’s budget and overall fare revenue. Nevertheless, these increases are detrimental to riders, and fly in the face of the City’s supposed objective of increasing ridership.

Stephan is frequently cynical and has an on again, off again interest in politics and holding our public officials to account, mostly at the municipal level. Despises hypocrisy. A number cruncher born and raised in Saskatoon. Mmmm, crunchy numbers. Blogs at yxesimonsays.wordpress.com and tweets @yxesimonsays

There are no upcoming events.